In recent years, researchers have been learning more about how an increasingly “thirsty atmosphere” in California and the West is influencing drought. We talked to Mike Dettinger—a climate scientist and a member of the PPIC Water Policy Center’s research network—about this phenomenon. 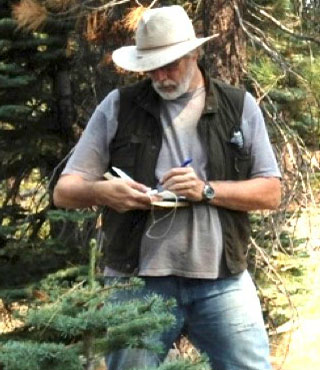 PPIC: What is a “thirsty atmosphere” and why is it happening?

MIKE DETTINGER: The atmosphere has the capacity to draw water up from the land through evaporation. Five factors affect how much water the atmosphere can take up: how warm it is, how humid, the amount of sunshine, the amount of wind, and the available water in soils, plants, lakes, etc. Scientists often refer to the first four as the atmosphere’s “thirstiness,” or evaporative demand. It varies hour to hour, season to season, and year to year based on these factors.

Generally, when most people think about drought they think of not having enough precipitation. But depending on variability in those factors, the same amount of precipitation can bring more or less runoff or more or less water in the soil based on how thirsty the atmosphere is.

Scientists have been thinking about this thirstiness more in recent years because we’ve only recently started to get good data on it. We’ve long had data on the amount of precipitation, but only in the past few years have scientists managed to put together datasets that gave us similar levels of detail on the thirstiness of the atmosphere. There are probably 100 times as many rain gauges as there are the kind of meteorological stations that measure evaporative demand. But now satellites are being used to estimate it over broad areas and time scales, and suddenly everyone can see this important “other” cause of droughts.

PPIC: How does this play into drought intensity and frequency?

MD: Under climate change, we’re not so sure what will happen with precipitation in California, but you can bet the farm it’s going to be warmer. And that means evaporative demand is likely to increase. In fact, virtually the entire West has seen evaporative demand increase a lot since 1980 when conditions started warming up.

A thirstier atmosphere means the same amount of precipitation leaves less water for plants, streams, reservoirs, and aquifers. We get less benefit from precipitation because a larger proportion goes back into the thirsty atmosphere. Smaller storms in particular may bring little to no water benefit at all if the atmosphere is thirsty.

The bottom line is this—as the atmosphere becomes thirstier, the land becomes drier, even if the amount of precipitation stays the same. Increased persistence and frequency of dry conditions means increased frequency and intensity of drought.

Projections of future climate agree on a number of things: temperatures are going up, and although the atmosphere can hold more water because it’s warmer, in between large storms it is thirstier and wants to evaporate more water from the land. Climate models also agree that in California the changing climate will mean more dry days overall, which comes about because the atmosphere is so thirsty that we’ll get fewer medium and small storms. We’re drifting toward a future where, largely as a consequence of this thirsty atmosphere, we spend most of the time in a state of perennial drought, interrupted periodically by atmospheric rivers that dump a lot of precipitation.

PPIC: Where do we go from here?

MD: We’re still sorting this out—it’s new science. Although we are learning a lot, it is not certain how this will play out. But we should plan now for longer, drier dry periods interrupted by occasional much wetter wet periods. This increasing variability due to a thirsty atmosphere poses many challenges, particularly in terms of capturing and storing more of the flood flows for water supply because increasingly they will be the main flows available. One of our main hedges may be to find more ways to store floodwaters in aquifers that are going to be depleted all the more by the growing droughts.

How “Weather Whiplash” Could Change California